Skip to content
The Independence Day Holiday affords a little break for the league.  Back in the “olden days”, we took a ten day or two week break around Independence Day.   The league was set up a bit differently then, and teams from Dallas participating in the Texas Cup had a big impact on the schedule, but the break is still welcome.  It allows players to heal up a little before the playoffs or spend time with the family over the holiday weekend. 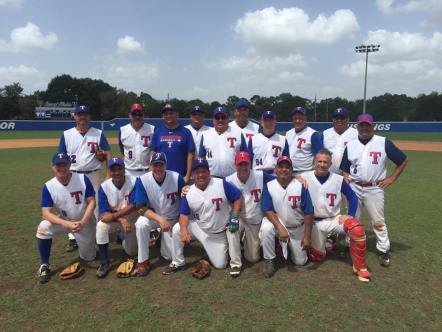 Speaking of the Texas Cup, the 55+ Dallas Rangers took the 2017 Texas Cup title this weekend.  Congratulations to Jerry Castanada and the Rangers on a job well done.
As all of you are aware, our All Star Games at Dr Pepper Ballpark in Frisco will be Sunday, July 30.  Everybody in the league should be sharing the story and donation link with their friends and family and on all forms of social media.
The donation link is here:
https://community.tsrhc.org/NTABL_Donation
We have another cause rolling at the moment.  Joe Daniels, one of the founding members of the Dallas MSBL, past league president and past member of the Board of Directors is fighting ALS (Lou Gherig’s Disease) right now.  His Daughter, Ashley has set of a fundraising page selling “Joes ALS Strikeout” T-shirts.  Follow the link, buy a shirt (or three) and kick in a few extra bucks to help Joe.
https://www.customink.com/fundraising/joesalsstrikeout
Do it now.  The fundraiser is only open for another week or so.  Their goal is 100 shirts and they need out help to get there.
The NTABL was named MSBL “League of the Month” for July.  We should be seeing a write up on MSBLNational.comMSBLNational.com in a week or two.  Their timing is terrible.  We screwed the pooch on the American League schedule the other day and had to cancel some games this week due to lack of fields.   Of course the two games we DID have scheduled for that day were rained out.  Sigh…
Rookie League registration is on “Wait List” status for now.  Prospective players are now placed on a waiting list.  The extremely popular program currently has 80 players on four rosters.  Traditionally, we can open it back up once we get past the halfway mark and attendance begins to fade.
Our new grounds crew is up and rolling at Reverchon.  They were able to coordinate with the City to get dirt to level the infield, and they now have the other materials they need.  Sam Kayea has given them a crash course in baseball diamond prep.  The league purchased mound/batter’s box clay and some chalk, which our crew will keep with them.
It’s been a bit of a process for those guys.  Reverchon was basically abandoned for about a month after Aubrey stepped down as caretaker.  The City simply does not have the manpower to give the field the attention it needs after rains.  The plan is for our crew to fill holes in the mound and batter’s box, drag and chalk the field on our game days.  They will mow the infield twice weekly and the City will continue to mow the outfield.
This year is not quite as bad as previous years, but as always, fields are in issue.  In late May, we lost Lake Highlands and JJ Pearce fields due to the RISD closing all baseball and softball fields for the summer due to “maintenance”.  The butterfly effect of that was in last week’s bizarre schedule.  The good news is, looking forward, we only have one or two games without a field for the rest of the season, which is very manageable.
In the Open American League, Steve Britton has stepped down as manager of the A’s.   Mickey Whitaker has agreed to manage the team for the rest of the season.  Thanks, Mickey!
If you are still reading, thanks.